Five Fire Sprinkler Myths You Should Reconsider For Your Safety 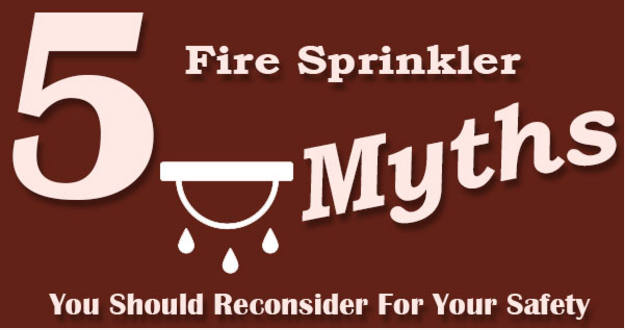 Fire safety should be first on every employer’s mind, especially since they are responsible not only for their own safety but the safety of their employees as well. While many businesses may think they’re prepared for the possibility of a fire, they could be very wrong! These five common fire sprinkler myths could be a detriment to the safety of businesses everywhere.

Fire sprinkler systems can cause more damage than they prevent

One of the most common — and most dangerous — fire sprinkler myths is that the water will cause more damage to the property than a fire would. In reality, nothing could be more untrue. The damage caused by a fully functional sprinkler system is much less severe than what would have been caused by fires or high-pressure hoses. In fact, the National Fire Protection Association (NFPA) has no record of a fire killing more than two people in a building where the sprinkler system was functioning properly.

Sprinkler systems are too expensive

Fire sprinklers aren’t required in every commercial space, and as a result, some property owners use this as an area to cut costs. However, when owners stop to think about the devastating costs that their company would suffer if a fire destroyed their entire building, there’s a clear choice to be made. Research shows that the combination of sprinklers and early warning systems in buildings could reduce overall injuries, loss of life, and property damage by 50% or more.

Every sprinkler turns on during a fire

Despite all of the scenes in movies where one sprinkler activates the whole system, the real thing is a little more boring and less wet. Fire protection systems like sprinklers have technology that allow each sprinkler head to operate independently. In the event of a fire, only those sprinkler heads affected by the fire will activate.

Smoke detectors are a very important part of any fire protection plan, but they can’t be a building’s sole source of protection. Fire alarms may warn people in a building of a fire, but they can’t do anything to help extinguish it and eliminate the threat.

Fire alarm inspections are the only way to know if your building meets NFPA regulations. In addition, nearly half of fire suppression systems failed during a fire due to lack of maintenance. Full fire alarm inspections should take place annually, and dry tests should be done every quarter. In addition, maintenance should be handled quickly, as soon as any issue arises.