Commercial Fires and How to Stop Them: 3 Fire Protection Products Every Structure Should Have 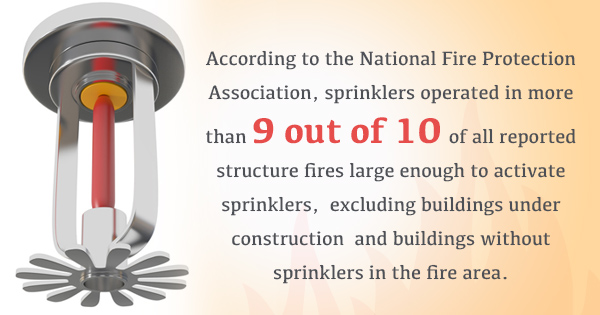 Commercial properties deal with more fires annually than you might think. For example, there’s about 3,900 hotel and motel fires reported to U.S. fire departments each year, but there doesn’t have to be so many. Here’s how commercial fire protection services can help your facility out.

It seems like it’s common sense — you’re supposed to have smoke alarms all throughout a facility — but believe it or not, many properties don’t. In fact, there was no smoke alarm present in about 14% of non-confined fires, according to one study. Fire protection services can outfit an entire structure with the proper amount of smoke alarms it needs, in the places it needs them the most.

A commercial fire sprinkler system is incredibly advantageous. According to the National Fire Protection Association, sprinklers operated in more than nine out of 10 (91%) of all reported structure fires large enough to activate sprinklers, excluding buildings under construction and buildings without sprinklers in the fire area. In these fires, sprinklers operated and were effective in 87% of them.

Fire extinguishers are also an obvious way to ensure the occupants of commercial properties stay safe in the event of a fire. Believe it or not, fire extinguishers successfully extinguished 12,505 of 13,221 reported fire incidents, according to a survey of the National Federation of Fire Equipment Distributors. That’s 95%. Best of all, virtually all study participants — 98% — were able to successfully use an extinguisher by pulling the pin, squeezing the trigger, and discharging the extinguisher without any training.

In order to ensure that the occupants of a commercial property remain safe in the event of a fire, a structure needs to be properly outfitted with smoke alarms, sprinkler systems, and fire extinguishers. Otherwise, tragedy could potentially strike.

If you have any questions about fire protection products, feel free to share in the comments.